The motomed is in the gym!

The Motomed is here and is up and running in the gym. Thanks to all the donations and fundraising, we were also able to purchase the arm attachment which was a great bonus and extends the use of the machine to lots of our members. Those lucky enough to use it so far have loved the opportunity to bike again after not being able to access our other bikes. They are benefiting from the assist function of the Motomed as it is helping them bike even if they don’t have sufficient muscle strength. A number of members have commented how alive their legs feel after using the Motomed and have been surprised at how much they can assist the biking motion despite having muscle weakness. One member fed back that

The Motomed has certainly brought many smiles to the faces of those who use it. If anyone thinks they would like to use the Motomed, then please contact Rachel or Maree to discuss further. 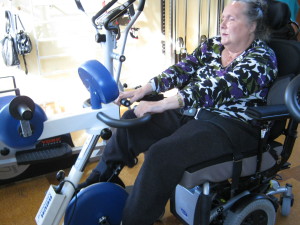 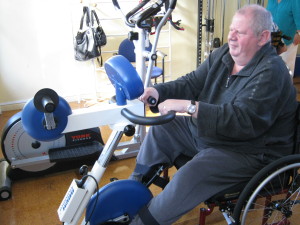 How did it all happen?

With the support of our community we have reached our goal to secure funding for MOTOmed Vita-2 Light You all know already that the Multiple Sclerosis and Parkinson’s Society of Canterbury will be hosting a premiere screening of The Second Best Exotic Marigold Hotel on Thursday 26 February 2015 at Hoyts Riccarton as part of our fundraising campaign to secure funding for MOTOmed Vita-2 Light exercise machine for the Society’s gym. We are thrilled to announce now that we have reached our goal just after 3 months. After the Movie Night we will have the initial amount needed to purchase the unit. We received strong support from the community: Giving Tuesday in December 2014 and private donations from members raised $820.00 Christmas cake raffle added $500.00 to the tally. The Papanui Club, a long standing supporter of the Society, donated $2,000 at the end of last year that will go towards the MOTOmed project as well. The Movie Night turned out to be a great success. We not only had to upgrade the cinema to accommodate everyone, but the evening was a sell out 3 weeks in advance and we raised the rest of the funding needed to buy the Motomed.

Many thanks to all who have made donations, purchased tickets or supported this campaign by sharing the information for our events and initiatives among family and friends and on social media.

Ingrid: My Oceans of Hope Experience

Rod: I did the Upbeat Outward Course

The Motomed is in the gym!